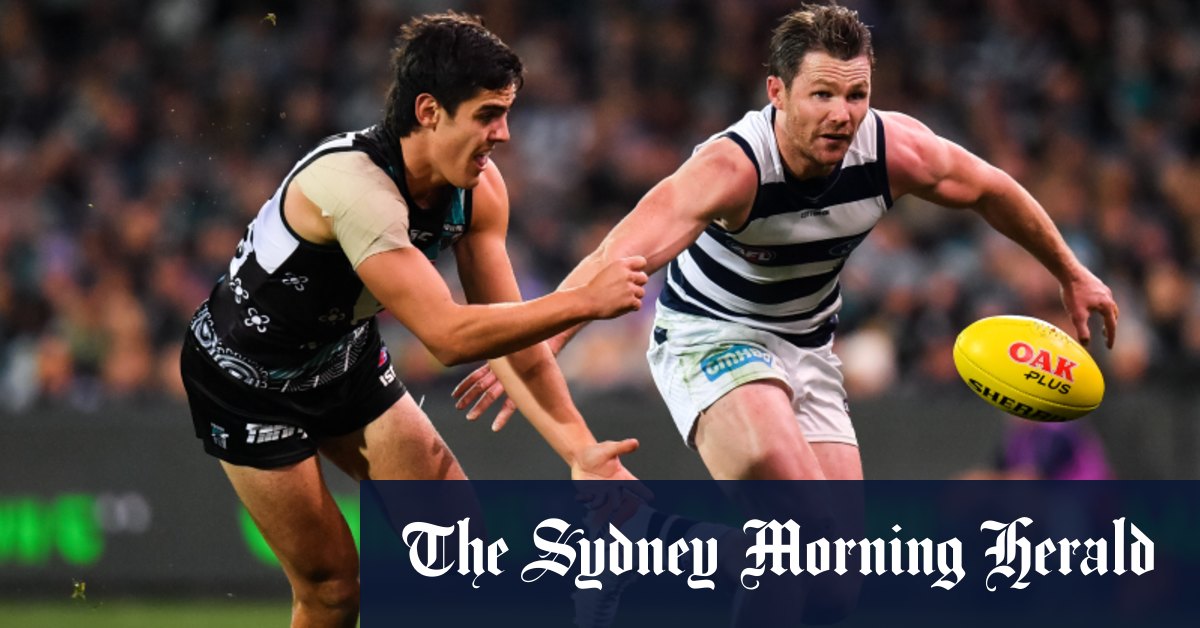 Charlie Dixon has not had a touch. He’s the one capable of breaking the game open for Port.

Mitch Georgiades is also touchless at the half, while Sam Mayes (1 disposal), Steven Motlop (2 disposals) have come into the side with fresh legs yet have had no impact.

Lachie Fogarty (2 disposals), also came into the Cats side but hasn’t done a lot.

The Power can also get more out of Hamish Hartlett, Xavier Duursma and Robbie Gray who are capable of adding X-factor into this match.

Cam Guthrie has 15 at the half. Sam Menegola has 14, he was only able to add four touches that quarter.

Sam Powell-Pepper (13), Karl Amon (12) and Travis Boak (12, four clearances) were able to give their side a bit more momentum that quarter. Patrick Dangerfield also has 12 disposals and two clearances.

Well the Power certainly evened up a number of statistics but the Cats extend their quarter-time margin from 13 to 15 at the half.

Both sides have had seven scoring shots, but the Power have kicked 1.6. A lot of their shots on goal have been under pressure.

Tom Hawkins has kicked three of the Cats’ four goals.

Port Adelaide has dominated the territory game in the past 10 minutes.

They have not taken one mark yet inside 50.

Powell-Pepper takes a shot on goal from the pocket but hits the post.

Port has lifted its intensity in the past 10 minutes, but they really need a steadier.

Amon has just kicked another behind, a long shot from 50.

Meanwhile, Harry Taylor is limping off the ground…

Another centre clearance from the Cats…

Mark Blicavs follows up his tap work and kicks it forward into space, ends up in Duncan’s hands and he puts it on a platter to Hawkins.

And the gun forward slots the set shot from a tight angle.

It’s another behind to Farrell.

Dixon had an open 50, one on one with Harry Taylor but it was a good contest. Farrell hit the front and centre and soccered the ball on but couldn’t get it towards the goal face.

Port is now playing behind Hawkins, on his shoulder.

Four times Hawkins has been able to work his opponent under the footy and take a mark out the back.

But now they’ve figured out they’re better off starting behind him. Will be interesting to see how this plays out.

A snap to Farrell misses right.

The Power won a free kick in the centre, a holding free to Byrne-Jones and he handballed to a runner which allowed Port to get deep inside 50.

But the Farell snap missed.

And the Cats work it all the way to their forward line – Blicavs and then Hawkins both take big marks.

The Cats are so good at getting numbers to the contest.

Hawkins has taken his third one-on-one mark inside 50, and he squares up the kick to Tom Atkins who will line up straight in front…

And Atkins seals the deal.