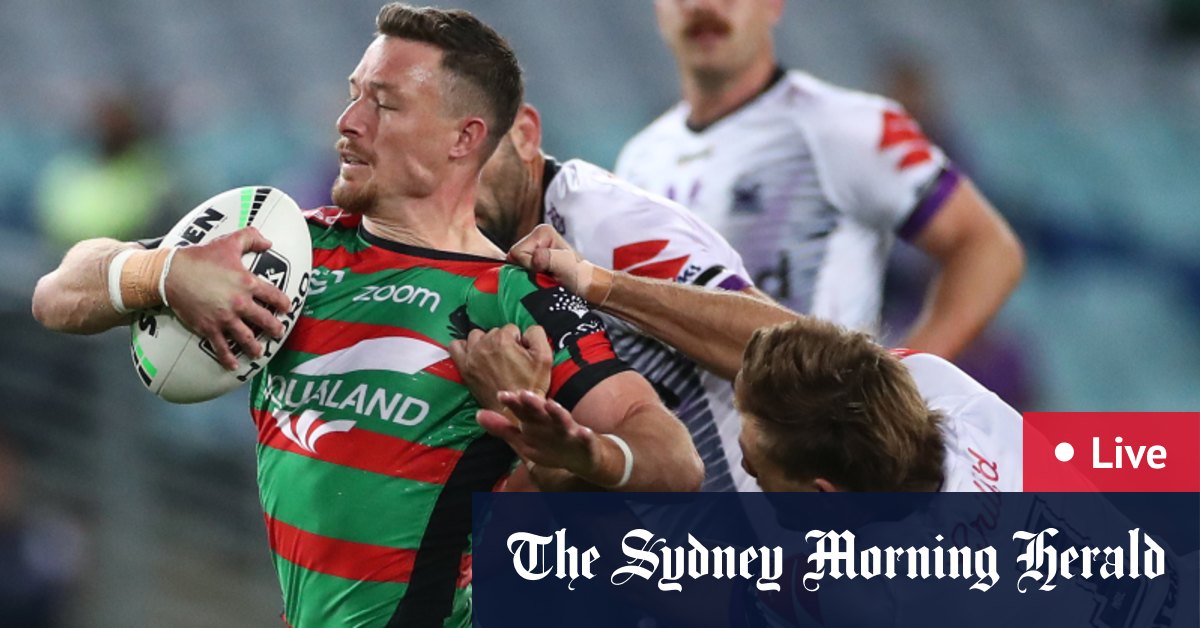 Christian Welch has fumbled the ball 30 out from his own line, opening the door for Souths.

Let’s see if they can find a try to level the score with 10 to play.

The Storm are in front.

After 65 minutes, they have their first lead of the night.

Quick hands from Cameron Smith found Ryan Papenhuyzen, he danced through some disorganised Souths defence and foudn Cameron Munster on his left, who crashed over to give Melbourne their first lead of night.

Cameron Smith put Tino Faasuamaleaui through a hole from close range, added the extras and it’s now 16-all with 20 to play.

That Smith pass may have been forward on second look but hey, who are we to judge.

That was a scrappy set from the Storm but a perfect Ryan Papenhuyzen kick forced Souths to bat the ball dead.

A little Bayley Sironen knock on from a Jahrome Hughes grubber has given Melbourne a fresh set inside Souths’ 20.

Let’s see if they can nab the try which will put them back on level footing with the home side.

Not a great deal has happened in the last 10 minutes, as both sides adjust to the slippery conditions.

Keaon Koloamatangi put his head in a nasty position while trying to make a tackle and copped a heavy knock.

He’s off for a head injury assessment. I doubt we see him back on the field tonight.

Christian Welch has been penalised for a crusher tackle 40 out from Melbourne’s line and the call from the Souths sideline was to take two points.

Not a worry in the world for Adam Reynolds, who put the ball over the black dot.

We’re back underway at ANZ Stadium.

It has just started pouring in Homebush, which adds an extra element to this clash.