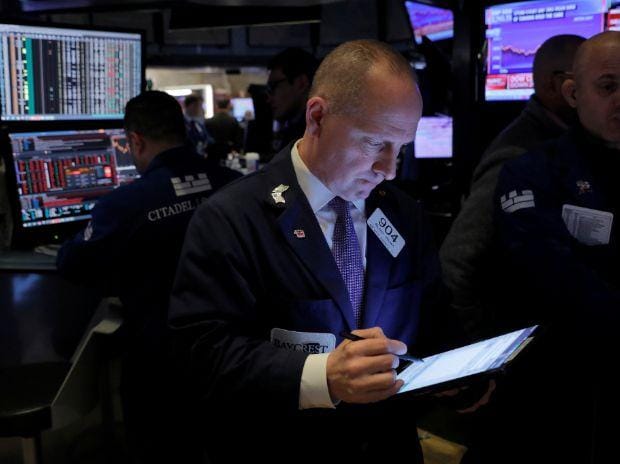 The S&P 500 hovered near record highs on Monday as bets on a rebound in economic activity due to prolonged central bank support put the index on course for its best August in more than three decades.

The Federal Reserve’s commitment to tolerate inflation and keep interest rates low, positive developments in vaccines and treatments for Covid-19 and a momentum-driven rally in tech-focused stocks have helped the S&P 500 and Nasdaq hit consecutive all-time highs.

The newly reshuffled Dow slipped, and was within 3.7% of its record close on Feb. 12, while the tech-heavy Nasdaq climbed another 0.7% to a new peak.

“It’s back to Nasdaq leadership and profit taking in other parts of the market,” said Liz Ann Sonders, chief investment strategist at Charles Schwab.

“I worry that sentiment has gotten frothy and there’s a lot of money in the market that doesn’t see any downside risk.” High-flying Apple Inc rose 4%, while Tesla Inc jumped 9%, as their stocks became less costly after their pre-announced stock splits took effect.

The three main indexes are also set for their fifth straight monthly rise following March lows, with the S&P 500 looking at its biggest percentage rise in August since 1984, even as economic data pointed to an uneven recovery from the steep downturn.

China data showing a solid pace of expansion in the services sector this month lifted spirits at the start of the week. Focus will now be on the August US jobs report slated for Friday.

US presidential campaigns are set to take center-stage in the coming weeks with market volatility expected to spike ahead of polling in November.

Suitors for TikTok’s US assets, Microsoft Corp, Walmart Inc and Oracle Corp, dropped between 1.0% and 3.1% as China’s new rules around tech exports meant a deal with ByteDance could need Beijing’s approval.

The S&P index recorded 29 new 52-week highs and no new low, while the Nasdaq recorded 68 new highs and 13 new lows.